This month we celebrate Pride and the progress and achievements made by communities working together to effect change.  We feel hopeful, yet we know that the inequity and injustice wrought by capitalism continues.  In the United States the number of people living with HIV has increased since 2010; with the highest rates occurring in the South, where LGBTQ+ and vulnerable communities face deep-rooted prejudice and lack of access to healthcare.

Celebrate pride with events in New York City this weekend  https://reclaimpridenyc.org and  https://www.nycpride.org/events and continue the fight for health justice for all. 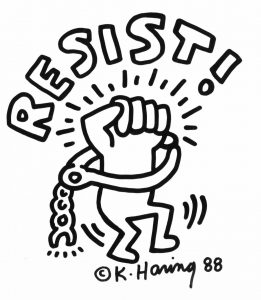 Come celebrate pride this Sunday, June 26, with the biggest LGBT pride celebration in the world!  Everyone is invited to share in free and inclusive events that commemorate and celebrate diversity and equality.

The march begins at noon on Sunday at 36th Street and Fifth Avenue, and works its way downtown to Christopher and Greenwich Streets in the West Village.  Also on Sunday is PrideFest, Heritage of Pride’s annual LGBT street fair.

Keith Haring created this logo for Heritage of Pride, the organization that hosts New York City’s Pride events in commemoration of the Stonewall Riots of 1969, the beginning of the modern Gay Rights movement. The Stonewall Inn was recently granted landmark status by New York City’s Landmarks Preservation Commission, the first time a New York City site has been designated as a landmark primarily for its significance to LGBT history. Read more about the decision here.

The annual NYC Pride March, the culminating event of Gay Pride month, starts at Noon on Sunday at 36th Street and Fifth Avenue and works its way downtown to Christopher and Greenwich Streets in the West Village. Also happening on Sunday are PrideFest and Dance on the Pier, a fund-raiser featuring Ariana Grande.